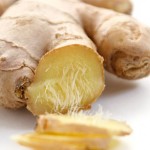 Ginger is a common recommendation in my clinic. Ginger is wonderful for digestive disorders and it is anti-inflammatory. “

Drink Ginger tea” is one of the most common suggestions I make.

Don’t underestimate ginger just because it isn’t the fancy favorite of TV Chefs. Ginger root is a common herb used in Traditional Chinese Medicine (the Chinese name is Sheng Jiang). Ginger is also used as a spice for cooking, particularly in Asian food.

Here are some great ideas from an article by Jennifer Dubowsky, L.Ac. originally posted Dec. 2008 about the benefits of ginger.

Ginger’s rhizome (the underground stem) is highly spicy and widely touted to aid digestion. That is why ginger tea is very popular. In addition to a lovely flavor, it is anti inflammatory and eases digestion. Consider drinking ginger tea after meals. Another benefit from ginger is its ability to combat nausea from various causes including morning sickness, motion sickness, chemotherapy,and food contamination. Many people use ginger to treat coughs, influenza, and colds. I also recommend it to my patients to improve fertility and ease PMS symptoms.

It is interesting to note, too, that ginger has been employed in Chinese herbal medicine for thousands of years due to its numerous beneficial properties. Called Sheng-jiang in the Chinese pharmacopoeia, ginger used alone as a single herb is considered to alleviate nausea, dispel pathogens by inducing sweating, expel cold, as well as stop coughing and reduce excess phlegm in the lungs. In Chinese herbal medicine, Sheng-jiang, or fresh ginger, is considered to have very different properties than Gan-jiang, or dried ginger. Gan-jiang is useful for “cold” pain of the stomach and abdomen, diarrhea due to “cold” in the abdomen, cough, and rheumatism, among other uses. Dried ginger has also been shown to inhibit vomiting.

A Japanese study brought ginger into the experimental lab. The study, led by Dr. Hiroshi Ochiai at the Department of Human Science, Faculty of Medicine, Toyama Medical and Pharmaceutical University, Japan, was published in The American Journal of Chinese Medicine, 2006:34(1):157-69, and reported in the Chinese Medical Times, concludes that they were able to inhibit the growth of influenza virus using ginger extract.
For more articles by  Jennifer Dubowsky, a licensed acupuncturist in downtown Chicago, check out:  http://acupuncturechicago.blogspot.com/