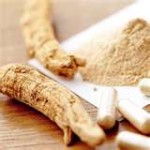 Typically, May weather in Wisconsin is wet, but not below freezing.  This was not the case on May 7, 2010 in Marathon County when it snowed 3-4 inches in 24 hours. The freezing temperatures have likely killed all the newly planted Ginseng.

American Ginseng, also known as Panax quinquefolius, is a highly sought after Chinese herb used for centuries.   It is the root of this herb that is used medicinally.  Wisconsin depends on American Ginseng for over 15 million dollars each year and the freakish weather is estimated to have killed or damaged up to 80% of the new crop.  The cold weather snap effects the recently planted seedlings the hardest and may seriously drive up prices.

Much of the harvest is exported to Asia where it fetches higher dollar values than in America.  Asian cultures  have used Ginseng for it's medicinal values for over 2000 years.  Used commonly to ward off colds & flu's, ginseng is also known for it's anti-cancer properties and research shows it reduces blood sugar in people with diabetes. The Ginseng Board of Wisconsin has a very nice website with more information.

The crop normally takes 4 years to mature.  Chinese herbs like American Ginseng are also grown in other parts of the U.S., mainly the woods of Kentucky and North Carolina. So, depending on how much Wisconsin Ginseng can be salvaged, the supply in the coming years may or may not be severely effected by Mother Nature's temperament. Many Chinese herbs grown in China have seen price increase due to Mother Nature.  An ongoing drought in China has effected another specie of Ginseng, and has already driven up prices as much as 300% this year alone.