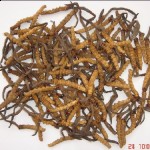 Shopping at a farmers market is always a favorite activity of mine, checking out the best produce and looking for the best prices.   I’d love to shop at a farmers market in Tibet where fresh cordyceps adorns the tables.  Cordyceps has a history of being the world best fungus. But the cost may shock you. A $100.00 or more for a fee ounces?  Prices vary depending on quality and can be even higher.

In China cordyceps is used as both a dietary supplement and medicine for the above mentioned  conditions as well as hyperglycemia, high cholesterol, respiratory disease and heart arrhythmias.   The Western world is catching on to the incredible benefits of this strange worm that metamorphoses into a fungus.  Clinical studies support these long held traditions, so many in fact  I can’t possibly mention them all here. Even world renowned Sloane-Kettering’s posted the following on their website: ”Several studies showed significant improvements in all respiratory symptoms at a dose range of 3-4.5 grams of Cordyceps. Improvements were in shortness of breath, cough and expectoration, and sleep.”

The original cordyceps sinensis grows only in the mountains of Tibet & Nepal (and some other parts of China.) Cited in Tibetan medical texts even before Chinese texts which date to the 4st century, cordyceps popularity has grown and is now Tibet’s number one export. Getting to the  remote  growing regions is not so easy.  Did I mention you’ll need to climb to a least 10,000 feet above sea level and the harvesting season is very short, April until the end of June. Harvesting requires the gatherers to be on hands and knees with their faces close to the ground.  The tiny cordyceps often resemble surrounding vegetation. A small knife is utilized for extraction, with extreme caution so as not to damage the larva, resulting in a loss of value. Each gatherer is lucky to collects an average of just 20 cordyceps in a day.

Cordyceps is a parasitic fungus that feeds mainly on butterflies, moths, and caterpillars. The wind spreads the spores over the soil and onto the plants, which are then either consumed by the future hosts or simply penetrate through the mouth or respiratory pores, eventually killing the insect. However, it is traditionally believed by the people of Tibet that cordyceps lives as a worm during the winter, and then in the spring undergoes a metamorphosis that changes it into a type of grass. In some areas, it is closely connected to local religion and its harvesting has been banned.

The mountain-grown cordyceps has become rare as more locals depends upon the income from its harvesting.  The popularity and wealth of benefits from this fungus prompted Chinese scientists to find another way to grow mycelia strains using fermentation technology.  Many experts say the laboratory grown cordyceps is chemically identical to wild grown, the benefit of course is its less expensive and widely available in Asia and I have seen it in China towns in the U.S.   If you’re ever at a farmer’s market or anywhere cordyceps is for sale, don’t balk at the price of this fungus. Considering its health benefits, it’s by far the best buy in the market.