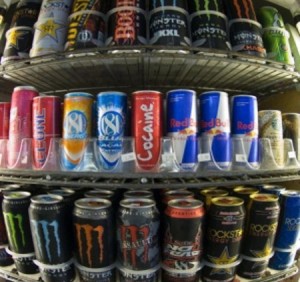 Even though energy drinks are readily available in every convenient store and a staple among students for the instant “pick-up”, the facts are now coming out about the damage they cause to your teeth.  Is a temporarily buzz worth all the cavities and what about the other side-effects?

Sugar is Not Sexy Either

This sugar acts to give a quick surge of energy. However an invasion of sugar into the bloodstream activates the release of insulin. Insulin is used by the body to regulate the level of blood sugar at a constant level. Insulin also stimulates the storage of fats and the increase in triglyceride levels. High triglyceride levels usually go in conjunction with low levels of HDL (good) cholesterol. Both of these are risk factors in cardiovascular disease.

Eating or drinking sugars per se does not cause diabetes but there has been research that has shown the link between the consumption of sweet drinks and increased levels of diabetes. High sugar levels also depress the immune system. Vitamin C and glucose have similar chemical structures so the process that allows sugar into the cells is the same as that which allows vitamin C into the cells. The result is that the more sugar there is the less Vitamin C there is. White blood cells require Vitamin C, with less, your immune system suffers.

There is also a link between consumption of sugar and teeth decay. Sugars assist plaque to form and develop on teeth. Plaque causes tooth decay. Tooth decay is not only painful it is also costly in terms of dental cover. Energy drinks are a particularly bad form of sugar intake in relation to teeth as they are usually consumed outside mealtimes.

Energy drinks usually contain a large amount of caffeine. Some energy drinks have been found to include between three and five times as much caffeine as a can of cola. Caffeine is addictive; as the body gets more tolerant to the effects then increased levels of caffeine will be required to obtain the same level of stimulation. There have been many studies dealing with caffeine and human health over the years which have shown a number of adverse effects on the body:

Advertising for energy drinks is often targeted at children and young adults. You only have to consider advertising and sponsorship of extreme sports, snowboarding and skating. Although these drinks are often directed at adolescents they are the ones that are at greater risk from consuming caffeine. Doctors from the University of Miami paediatrics department warned “Frequently containing high and unregulated amounts of caffeine, these drinks have been reported in association with serious adverse effects, especially in children, adolescents and young adults with seizures, diabetes, cardiac abnormalities, or mood or behavioural disorders and those who take certain medications”. One report found that one can of energy drink given to children aged between five and twelve would result in seven out of the ten of them having consumed dangerous levels of caffeine.

There has also been a trend of mixing the energy drinks with alcohol because it makes the person feel alert and energetic even when they are drunk. This however is a lethal combination as both the caffeine and the alcohol act to dehydrate the body. The cocktail of energy drinks, alcohol, dancing and heat has led to numerous hospitalisations.

The bottom line is that large quantities of caffeine and refined sugars and bad for our bodies. The temporary boost given on the consumption of these drinks is masking the short and long term damage being caused. There are natural alternatives that will provide an energy lift that do not contain the caffeine and sugar. Pacific Herbs has the only all herbal, 500 year old Energy Booster in a packet. Twelve natural herbs like ginseng, goji berries and others which have been used for centuries in Traditional Chinese Medicine (TCM). Get a boost for your mind and body without the unwanted side effects.