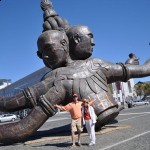 What is a mega Buddha monument doing in the middle of San Francisco?  Apparently San Francisco city officials wanted to underscore the bond between Shanghai, China and San Francisco, two cities of art and culture. I love discovering all things Chinese in America.  The Buddha is pretty much impossible to miss if you are near the Civic Center. (My husband and I are the tourists in front.) I would say if you have ever been to San Francisco you know that Chinese culture has been part of  the "City by the Bay" since it's inception.  What I enjoy most about San Francisco  is walking through China town and feeling like I'm in China without the 17 hour plane ride.  From the great deals on pearls to the cooked ducks hanging in restaurant windows you can see a little of everything Chinese just a few blocks away from the mega Buddha.

If you are ever curious what an herb shop or traditional Chinese herb pharmacy looks like in China, check out Stockton street in San Fran. The picture below is pretty good representation from store to store.   You'll find every strange root, dried fish and plenty of red shiny bottles labeled only in Chinese. This is the traditional medicine of China and that which millions of people rely on daily for their coughs, colds and aches and pains.  The same herbs that have been used continuously for generations.  If you have never purchased Chinese herbs before this may not be the place to start unless you speak the language.  It can be a bit intimidating since pretty much everything is labeled in Chinese. 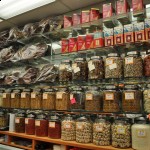 One last note on the mega Buddha,“Three Heads Six Arms reflects the changing realities of Chinese people today and also reflects the attitude that humankind has conquered nature and even reflects deeds of volition and hope,” said Zhang, the artist who created the colossal bronze sculpture.  It's definitely worth a drop by if your in the area, as are the Chinese herbal pharmacies.

4 thoughts on “Discover All Things Chinese in San Francisco”