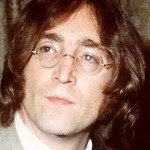 When John Lennon was shot, the world lost a hero.  If you are like me, you remember where and when you heard this news.  It was a sad day.   In honor of what would have been John's 70th birthday,  I celebrate his brilliance.

John Lennon was always ahead of his time, even in the 1970's.  John and Yoko visited "a practitioner of Chinese herbal medicine and acupuncture for spiritual and physical cleansing and healing" acording to an article in the New York Times today.   This news has apparently never before been made public.  The doctor,  originally from Shanghai China was an immigrant and  living with his family in San Mateo, CA.   It was reported that Keith Moon, the drummer for The Who, also came to Dr. Hong for treatments and may have been the liaison that brought John and Yoko to him.

Years later, it was reported that John sent the family money and saved them from poverty.  Barbara  Hong, the daughter of the Chinese herbal doctor said,  "Lennon liked to joke ..and play his harmonica, and one day he shared a new tune. “He played it on our piano,” Barbara Hong said. “He said, ‘This is a song I’m going to release soon.  It was “Imagine.”

Imagine that happening in your living room.   Thank you John for your vision to see the value in Chinese Medicine  when it wasn't even a licensed health modality in the 1970's.  We wish you were alive to see the state of Acupuncture and herbal medicine today.  I know you would be pleased to see how treatments like what you received  from Dr. Hong are now available from coast to coast and Chinese herbs are on every continent in the world.   Imagine what another 30 years will bring us!