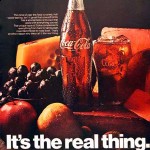 The worlds largest beverage company  Coca-Cola has been researching and developing drinks made with Chinese herbs for the past several years.  In the US, both Coke and Pepsi have both lost market share with their soft drink products.  To offset this marketplace change both have expanded into  energy drinks and  water  products.  Will Chinese herbal teas be next?  Are Americans becoming health conscious enough to purchase an herbal alternative? I think the tide is changing here.

I can report first hand that  a gas station/ mini-mart off I-5 near  Bakersfield California,  is now selling ging seng drinks from Korea right at the register.  Presumably, for drivers who  need an energy boost Coca-Cola with several new Chinese bottling plants in place Coke is set to expand,  as they say, “their beverages that contribute to well being”.   Coke is adding teas, water and energy drinks for Asian consumers who are avoiding sugary sodas and  who  now perceive those drinks as fattening.  In fact,  they have spent over 100 million dollars in the last couple years developing these drinks.

Business in China has more than doubled in the past five years and the  herbal teas are even eclipsing Coca Cola soft drinks.  With the Asian market growing  Coca Cola is working on worldwide expansion of these drinks. But Coco-Cola is not the only one exploring this new market share.  Pepsi  is not far behind and has also been building factories in China. Pepsi has a product called “Herb Joy” on the Chinese market, a  beverage made with several  common Chinese herbs including  the red date,  jujube.   Most recently,  Coke and Pepsi have been experiencing a boom from bottling  a cooling  herb tea, originally known as  Wanglaoji Cool Tea. This tea originated in the southern regions of China, where  spring and  summer temperatures are very hot. This herbal tea has been a popular Chinese drink in the summer, it’s a healthy choice to cool the body heat and quench the thirst.

Wanglaoji is based on  the Traditional Chinese Herbal Medicine theory of cooling the body. This tea is made by boiling herbs that are capable of reducing the bodies heat and improving digestion, in much the same method all traditional Chinese herbal medicines have been made for centuries. Varieties of this tea have traditionally been sold by street vendors. The big companies are now promoting these herbal teas with slick packaging and expanding to a global market.  More importantly for Coke & Pepsi, by adopting a traditional Chinese herb formula as a packaged drink,  they are culturally endearing themselves to the Chinese market , translation, higher sales. What about the American market?  I think the answer is yes Americans will be seeing more herbal products including herbal beverages on store shelves.  American will  buy them as long as the taste is “not to herbal”   and maybe it will help Americans pay a little closer attention to their health.