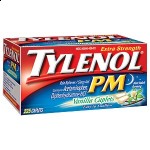 It’s only taken 15 years. The head of the FDA’s office of Nonprescription Products, Dr. Charles Ganley, sent a letter (released May 5, 2010) to the Consumer Healthcare Products Assoc. or CHPA on Feb 16, 2010 stating,  “There is an insufficient basis to support the combination of acetaminophen and diphenhydramine as a nighttime sleep aid for relief of occasional sleeplessness when associated with minor aches and pains”.
In other words, if your spending your hard earned dollars on products such as Tylenol PM and Excedrin PM your getting nothing more than minimal pain relief. Patients taking the over-the counter sleep products did not fall asleep any faster than those who took only acetaminophen or the sedative, known as diphenhydramine citrate, according to the FDA’s letter.
The FDA’s letter also questioned the data submitted by the drug companies behind these products. “The concern … is that we need an additional study demonstrating that the combination product is more effective than acetaminophen alone and more effective than diphenhydramine alone,” FDA spokeswoman Shelly Burgess said. The study submitted in 1995 failed to meet its main goal of showing that the combination of the pain and sleep ingredients could help people fall asleep faster.
The data on these sleep aid products was submitted 15 years ago. Why this took so many years to reach the ears of consumers is unknown. Reuters reported Ganley was not available for an interview, but Burgess cited the agency’s “significant workload in regulating over-the-counter drug products” and the need to prioritize based on available agency resources. She added that the letter did not reflect any other initiatives at the FDA, including a recall and recent concerns over acetaminophen’s risk of liver toxicity.
It’s unfortunate more people don’t know the benefits of Chinese herbs for sleeplessness. Natural sleep aids have always been needed and there are many wonderful plants and herbs that can benefit the sleep deprived.  Herbs can calm the mind gently to stop all the repetitive thinking that tends to keep us awake at night.  Chinese herbs do not have the side effects associated with prescription drugs and can be used safely long term.
http://www.reuters.com/article/idUSTRE6444R720100505 (Reuters reporting by Susan Heavey)
http://www.redorbit.com/news/health/1860843/fda_says_tylenol_pm_has_no_benefit/index.html