Another July 4th and Americans, including myself, love their fireworks shows. Most  people know the Chinese invented fireworks but do they know when?  The invention of  gunpowder  was approximately 800 AD.  Gunpowder  was used to make signal flares in 1232, later becoming fireworks.

What  else was going on in China, in the year 1232?  Well, Chinese Medicine was  enjoying more  popularity than ever  with more written text and heavy hitters emerging.  In fact, Chinese  medicine was enjoying a kind of renaissance. The Tang Dynasty (618–907)  already had  a claim to an important text on Pulses. The Huang Di nei Jing, arguably one of  the most important documents in Traditional Chinese Medicine, had already been around approximately 1000 years, (completed by 220 AD).

This year we celebrate our nations 233rd  birthday. Sound pretty young compared to Chinese medical history and the birth of fireworks.

Just as we embrace Chinese pyrotechnics to celebrate our independence we should also embrace another Chinese creation, Traditional Chinese Medicine.  Right now were at the birth of showing our independence  from Western medicine. With the advent of greater acceptance of  Traditional Chinese Medicine we are taking control of our health and well being.  Just as we embrace fireworks this 4th lets also embrace the other Chinese innovations.

Fun Fact:   (Fire rockets were made by filling capped bamboo tubes with gunpowder and iron bits (shrapnel). These lethal weapons were attached to an arrow, lit, and shot from a bow. These were the first solid-fuel rockets. The Chinese used them to fight the invading Mongol hordes.) 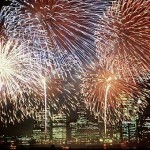