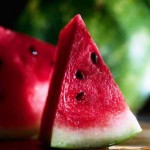 The first documentation of it's kind (in the U.S.), watermelon is shown to be an effective natural herbal alternative for high blood pressure, a precursor to heart disease. Even though watermelon has been used in Traditional Chinese herbal medicine for centuries it is not well known in the West as a medicinal food or herb.

Scientists at The Florida State University have been studying watermelon, a fruit also use in Traditional Chinese Medicine.  It is both a functional medicinal food and herb with vasodilatory effects.  This means the properties of watermelon extract may help reduce the risks of  pre-hypertensions from progressing to heart attacks and strokes.

"Given the encouraging evidence generated by this preliminary study, we hope to continue the research and include a much larger group of participants in the next round," he said.

Interestingly, Chinese herbal medicine classifies watermelon as a cooling food/herb to clear heat, (hypertension is an example of excess heat) and to drain fire (heat)  from the body.  This Chinese herb is known as Xi Gua,  and typically the rind is used, but the ripe fruit may also be used and even the seeds.

Watermelon frost has also been used as a traditional herbal remedy for mouth ulcers (sores), open wounds, sore throats, gum infections, toothaches… you get the idea.  What is watermelon frost?  Well, you remove the fruit part or insides of a watermelon,  then pack it with salt, put it in a bowl, seal well and after a few days, a ‘frost’ appears on the skin. This is the active ingredient  that can be used as an herbal medicine.

"Watermelon is the richest edible natural source of L-citrulline, which is closely related to L-arginine, the amino acid required for the formation of nitric oxide essential to the regulation of vascular tone and healthy blood pressure," Figueroa said.

Once in the body, the L-citrulline is converted into L-arginine. Simply consuming L-arginine as a dietary supplement isn't an option for many hypertensive adults, said Figueroa, because it can cause nausea, gastrointestinal tract discomfort, and diarrhea.  In contrast, watermelon is well tolerated. Participants in the Florida State pilot study reported no adverse effects.  Watermelon also provides an abundant amount of vitamin A, B6, C, fiber, potassium and lycopene, a powerful antioxidant. Watermelon may even help to reduce serum glucose levels, according to Arjmandi.  "The optimal dose appears to be four to six grams a day" according to Figueroa.

Findings from Figueroa's latest pilot study at Florida State are described in the American Journal of Hypertension. A copy of the paper ("Effects of Watermelon Supplementation on Aortic Blood Pressure and Wave Reflection in Individuals With Prehypertension: A Pilot Study") can be accessed online.