The National Cancer Institute funded a study on ginger for nausea resulting from chemotherapy which included 644 patients. The most effective doses of ginger were 0.5 grams and 1.0 grams per day. The study participants also took traditional anti-nausea drugs in this double blind study.  All doses of ginger were found effective and all doses significantly reduced nausea compared with a placebo.

Ginger root has been used in Traditional Chinese Medicine as a medicinal herb for thousands of years. Ginger is one of the most common herbal remedies found in Chinese herbal formula 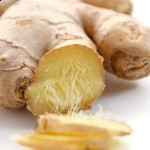 s for colds and flu, nausea, it’s used to warm the body, improve digestion and reduce phlegm in the lungs. There have been numerous studies on the effects of ginger conducted in China. Many do not get translated into english. However, one particular study published by Evidence-based Complementary and Alternative Medicine Journal concluded that “ginger was able to protect the gastric mucosa from stress-induced mucosal lesions and inhibits gastric acid secretion, due in part to inhibiting growth of h. pylori as well as offering anti-oxidant protection against stress induced gastric damage”.