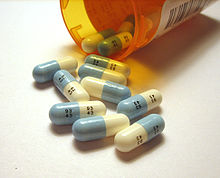 At first I thought it was a joke, but it's for real.  Prozac is now being touted as the latest greatest thing for PMS and PMDD.  This is the drug used for treatment of depression or obsessive-compulsive behavior.  You know, the happy pill. Sadly,  I've seen lots of people who are not happy, who take this pill.

Straight from Wikipedia (and a few other sources) re-labeling drugs is becoming a common occurrence when a prescription drug  patent is about to expire. The  manufacturer suddenly finds "new uses" for it to stem the post-patent sales decrease.    Eli Lilly's re-branding of Prozac is the latest drug to suddenly find new uses.  This time the "research" (hmm, some research at the University of Birmingham, but couldn't find anything published) says it works for the treatment of PMDD, otherwise known as  Pre-Menstrual dysphoric disorder (PMDD). This is a dramatic form of Premenstrual syndrome.

Not to worry though, because if Prozac helps your PMDD or your PMS you only have, well minimal side-effects.  Here's the short list.

In clinical studies, the most common side effects Prozac included:
Other common Prozac side effects (that occurred in at least 1 percent of people) include:

Lastly, let's not forget that Prozac, like all anti-depressant drugs, carry the "black box warning"  on the label.  That's the little caveat that says if you commit suicide it's not our fault because we  are telling you this drug may give you suicidal thoughts.

If you need something for PMS or menstrual cramps and pain, we have a better answer.  You don't have to suffer and you don't have to take a drug with side-effects.  Check out all your options.  Feeling good again can happen, check out a natural alternative used for generations.  We've got it here.

Wikipedia  says:    Eli Lilly's patent on Prozac (fluoxetine) expired in the United States in August 2001, prompting an influx of generic drugs onto the market. Prozac was rebranded "Sarafem" for the treatment of PMDD in an attempt to stem the post-patent decrease in Eli Lilly's sales of fluoxetine.