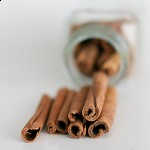 More proof on the healing power of Chinese herbs. This herb is in nearly every American household spice rack and yet most Americans have no idea of its many medical uses.  I’m talking about cinnamon. You sprinkle it on your latte and your apple pie. Now you may want to consider drinking a cup of cinnamon tea.
This study conducted at the Beltsville Human Nutrition Research Center in Maryland concluded that cinnamon can help those who are overweight and obese improve their fasting glucose.  This is great news for the millions of Americans who are tipping the scales and have either pre-diabetes or are currently diabetic.
The herb/spice/botanical comes from the bark of the cinnamon tree and has been used in Traditional Chinese Medicine for generations. It is considered GRAS (Generally Recognized As Safe) by most Western doctors. The study used a cinnamon extract tea (cinnamon boiled in water) for12 weeks and found substantial benefits to the participants in the study who reduced  their risk factors associated with diabetes and cardiovascular disease. (The also found benefits after just 6 weeks.)
But don’t start drinking loads of plain old cinnamon tea if you are looking for the same benefit. There are many different grades of cinnamon and preparation of the bark is central to preserving its natural antioxidant qualities.  Herbalists and Acupuncturists usually use either capsules or granule form.  This is a highly concentrated extract, cooked under a precise temperature for a precise amount of time. Often special equipment is used to capture the volatile oils of the cinnamon bark and reintroduce those oils back into the finished extract. This is essential because cinnamon is extremely aromatic and cooking the bark for too long without proper equipment will leave you with an ineffective tea.
Cinnamon has been recorded as part of Chinese herb formula combinations as far back as 200 AD.  It is in over 45 common formulations and its main purpose is usually to warm the body.  Cinnamon bark and twig may both be used, usually in very small amounts, between 3-9 grams daily. It is not uncommon to use cinnamon for the common cold, to help unblock cold mucus. Cinnamon is not recommended for those with a hot constitution in Traditional Chinese Medicine because of the herbs warming properties.
Personally, I'm happy to see any Chinese herb get into the Western spotlight because every time a Western medical establishment focuses on a Chinese herb the knowledge gained proves what Asian cultures have been practicing for over two thousand years.  Botanicals are huge sources of natural healing compounds.
Connect to the study here