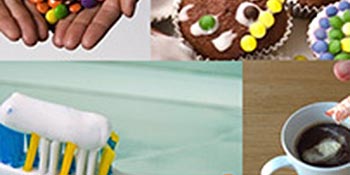 Although you might not ever intentionally consume titanium dioxide it is commonly found in processed foods, vitamins and many dietary supplements. Check the ingredients in your vitamins and supplements to find out whether you’ve been unknowingly consuming titanium dioxide.  This just-released research from Australia presents pivotal evidence on the effects of titanium dioxide on our gut microbiota. Co-author of the study Assoc. Professor Macia said, “this study investigated the effect of titanium dioxide … and how it promoted the formations of biofilms.” Biofilms are bacteria that stick together and often impenetrable by antibiotics and many drug therapies. Biofilms have been reported in diseases such as colorectal cancer.

Many vitamin and herb manufacturers use titanium dioxide as a filler or excipient in over the counter dietary supplements.  Everything from your melatonin for sleeplessness to your multi-vitamins may contain small amounts of this toxic chemical.  The Univ. of Sydney study showed even nanoparticles of titanium dioxide have a harmful effect on our gut bacteria.

One of the founding principals of Pacific Herbs and reason for launching this herbal business was to bring the purest and most potent herbs to consumers. Pacific Herbs products have never contained any unnecessary fillers or excipients, and would never add titanium dioxide under any conditions.  Check your bottles of supplements in your kitchen.  Find out the truth, hopefully, they don’t contain this nasty chemical. If they do, return them to the place of purchase and use that money to buy pure products that will improve your health not harm it.

“Vitamins are good for us’” is the overwhelming consensus if you ask just about anybody.  They support our body functions and gives us the extra nutrients we need. So what’s titanium dioxide, (now categorized as a carcinogenic in Canada)  doing in bottles from some of the largest vitamins manufacturers.  If you’re like me, this news comes as a big surprise.

You are not alone if you’re having a hard time understanding the names on this list of ingredients. Certainly, this is not a product you should purchase if you are looking for a healthy vitamin. There was once a time when we received all our vitamins from the foods we ate and the water we drank.  Sadly, it is no longer the case. Vitamins and minerals once plentiful in our soil have been depleted by years of over-harvesting and the use of harsh fertilizers. Taking supplements is necessary today.  But to include un-pronounceable chemicals into vitamin supplements is obscene. This practice by the large manufacturers is not done for fun, all these chemicals actually have a purpose.  Some prevent the gluing together of the tablets, others provide a pleasing color or help the machinery so they don’t clog when filling bottles or capsules.  But why would we want to include these chemicals into our vitamins and herbal supplements when they have never been part of the food chain? Have you seen FD&C Yellow No. 6 Aluminum Lake (included in the list above) grown anywhere or does it come from an animal? The answer is nobody really wants to ingest these chemicals.  Yet ingesting any substance, never before in our food supply worries me.  The trace amounts of scary sounding chemicals may seem like insignificant risk factors but when you add up the number of chemicals we are exposed to on a daily basis it becomes alarming,  as do cancers rates. We have no real data on how these chemicals react in our bodies, yet the FDA has approved the use of these chemicals in food products. What about herbal supplements?  Many contain a similarly long list of added chemicals and preservatives.

Do you buy from reputable manufacturers?  Do you read the labels?  Pacific Herbs herbal products are produced with the highest grade raw herbs available.  All our raw herbs are inspected and tested for 200 different impurities. This is the only way to know the raw products are pure and void of contaminants.  We package our herbs in individual stay-fresh packets to avoid the use of fillers, binders, excipients and flow agents.  We figured you probably get enough unknown chemicals from everyday life, you don’t need anymore in your health supplements.