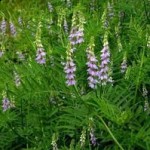 Just another amazing plant compound that has been around a couple thousand years.  Now 21st century science is catching up.  Licorice root, a Chinese herb, is being studied at the University of South Carolina.  The researchers found an extract in this root can prevent brain cell death in diseases such as Alzheimer’s and Parkinson’s.

We’re not talking about licorice in the form of candy, you’ll have to use the root of the licorice plant.  The specific plant the researchers are studying comes from the high mountains of China, where it grows like weeds, as do many Chinese herbs.

Apparently, it is the LQ or liquiritigenin in the licorice that mimics the hormone estrogen.  The researchers are growing brain cells and studying the effects of the LQ on them. Looking at microscopic views of the brain cells, healthy cells have lots of green dots.

“Those green spots are where the cells actually connect,” Dr. Booze says. “And what happens in diseases  like Parkinson’s and Alzheimer’s  is that the neurons lose their connectivity. So we study the green dots of connectivity and use the phytoestrogens to increase the green dots.”

Her research is the first ever done on LQ and the first to test some of these phytoestrogens in the brain.

“My long-term goal, my dream would be a prevention, but we’re not there yet. Obviously we’re still looking at the effects in our dishes,” she says.