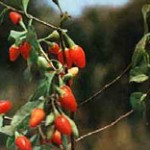 Traditional Chinese Medicine theory believes that each season has a different energy to it, and as such, we should replicate the energy of that season in order to maintain balance within ourselves. During this season, as our responsibilities grow and we find ourselves searching for more energy, protection for our immune system should be at the top of our lists.  One way to do this and improve digestion is with a few common Chinese herbs.  There are a large number of herbs that can be easily found in your local grocery stores. Here are three to get you started.

Gou qi zi, more commonly known as goji berries, has become a staple at most local grocery stores, and in many different trail mixes. This potent Chinese herb has been used for thousands of years in Traditional Chinese Medicine, (TCM) and has been used as a remedy for everything from anemia to increasing immunity. It’s both high in Vitamin C and also contains many antioxidants. Including them in your diet is simple – sprinkle them on your cereal in lieu of a sweetener, or have them as a snack in the afternoon when you’re looking to increase your energy. Studies are also beginning to suggest that they can even help to inhibit cancer growth and reduce the risk of developing Alzheimers.

Sheng jiang, more commonly known as fresh ginger, is a savior for anyone who has ever experienced nausea, an upset stomach due to overeating, or the onset of a cold. Fresh ginger is used in a significant number of Chinese herbal formulas and is known for its ability to simultaneously stimulate the appetite and to calm the stomach. It is believed to ease nausea by increasing digestive fluids while absorbing and neutralizing toxins and stomach acid. Add several slices of ginger to water and bring it to a boil for tea, or even include it in your favorite chicken soup recipe at the first signs of sneezing or coughing.

Rou gui, more commonly known as cinnamon bark, not only marks the holiday season but can also aid in keeping you warm as the temperatures drop. It’s an excellent way to tonify your Kidney energy as well, which serves as a storehouse of energy for your entire system. Use it as a garnish to your hot chocolate or apple cider, or even include it in your holiday snack mix.

The beauty of Chinese Herbal Medicine is that even if we can’t slow our schedules to accommodate the downturn of activity reflected in the natural world around us, we can look to the natural world to provide us with support as we move through this time of year.