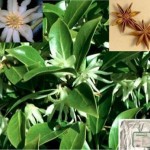 The Star Anise, Illicium verum  or Ba Jiao Hui Xiang has been used as a spice and medicine since antiquity.  Star Anise is used dried and the seeds have a licorice-like flavor. It’s commonly  sold in supermarkets and often used in Chinese cuisine to flavor duck dishes. ( I used it once in my Thanksgiving turkey, it was a hit)   It’s also  contains the active chemical component in the drug Tamiflu, which is now being stockpiled as a defense against the Swine flu.

Star anise was originally in the spotlight  because it’s core ingredient  was discovered effective as a flu fighter for the Avian flu. Now it’s being touted for the swine flu.  In an  announcement in Feb 2006 from  the University of Tokyo’s Graduate school of Pharmaceutical sciences,  they “ found a way to make Tamiflu without using shikimic acid, which is produced from a spice called star anise”  The acid is extracted from the pods which wraps the seeds by using a petrochemical ingredient instead of the plant based ingredient.  The group, headed by Prof. Masakatsu Shibasaki said the new method would ensure the stable supply of the antiviral drug in the face of surging demand worldwide prompted by fears of a bird flu (AVAIN) outbreak.  Although many believe the best  way to produce shikimic acid is extracting it directly from the fruit.

“It (Tamiflu) doesn’t prevent the infection,  but may decrease its’ severity,” (although there is no scientific data it will prevent H1N1) according to the Tamiflu website.  Tamiflu has been on the market since Oct. 1999 and Roche probably never dreamed that this years orders would top 220 million.  In the first  three years Tamiflu was on the market only 5.5 million doses sold.

Other  information from the Tamiflu website said this:  “Influenza viruses change over time. Emergence of resistance mutations could decrease drug effectiveness.  Other factors (for example changes in viral virulence) might also diminish clinical benefit of antiviral drugs. Prescribers should consider available information on influenza drug susceptibility patterns and treatment effects when deciding whether to use Tamiflu.” (line 155),   It continues elsewhere on the site with this,  “Efficacy of  Tamiflu in patients who begin treatment after 40 hours of symptoms has not been established” and “ Safety & efficacy of Tamiflu in pediatric patients younger than 1 year has not been studied.”

Star anise sells for aprox. $5.00  or less for a few ounces.  The best source I found said a dose of Tamiflu contains the equivalent of approximately 13 grams of star anise. That’s a few cents per dose.  Studies on guinea pigs yielded evidence that star anise essential oil had a relaxant effect, antispasmodic  and bronchodilatory effect on muscarinic receptors. People have  traditionally used star anise to reduces gas, relieve minor digestive problems, for headaches  and even to promote vitality.

If your interested in drinking star anise as a tea, a typical dose is .5-1 gram of  coarsely ground seeds. Cooked at a slow boil (covered) in 2 ½ cups water for a aprox. 30 minutes  and then strained. Ground star anise has been traditionally taken in a dose of 3 grams daily. The essential oil of star anise in a dose of 300 milligrams daily has also been reported.  The Food and Drug Administration lists star anise as “generally safe for otherwise healthy adults who are not pregnant, nursing or have a preexisting allergy to the herb.”  I hope the swine flu fades quietly into oblivion like the Avain flu.  Who knows  what will happen once weather changes in the fall and winter when flu season is upon us.  In any case, if your considering a dose of Tamiflu your armed with some knowledge.  Most importantly keep your immune system as strong as possible to avoid any future viruses that abound and remember  grocery store shelves can be very beneficial when you know how to shop. 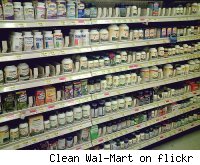 This week is another important milestone for the Dietary Supplement industry.  June 25, 2009 is the deadline the FDA (Food & Drug Assoc) has given for medium sized companies, (those with more than 20 employees) to comply with cGMP or Current Good Manufacturing Practices.  What this means to the consumer is another step closer to more consistency in  over the counter herbal supplements and all dietary supplement.  The cGMP regulations  protect the consumer by providing  standards for ensuring purity, identity and strength of composition for each product produced.

The best producers in the dietary supplement  industry have been complying with the FDA regulations for years and these regulations have no major effect on them.  Now the smaller companies  need to comply, bringing standardization in the supplement industry.   Most likely it will also give third party certification companies an even more important role, proving to the consumer that products truly contain the amount of supplements listed on their label.  No doubt manufacturer will begin putting  pressure on their suppliers to give proof of the purity of their raw materials  taking some of the testing burden of themselves.  Down the road this may lead to increased cost of raw materials as product  testing becomes more the norm rather than the exception.

Although this may lead to some retail price increases, overall it is extremely beneficial  for the consumer.  Products will me standardized and hopefully as a result more effective.  Of course, unscrupulous manufacturers exist in every industry and those adding prescription medications into an “herbal supplement” may still find that without FDA inspectors knocking at the doors for regular inspections it is all to easy to provide tainted products.  This is where third party independent testing is crucial.  FDA will never have enough in their budget to run from factory to factory and oversee these regulations.  Consumers must be diligent in knowing where their products are manufactured and by whom. They must do some minimal research at places like consumerlabs.com to get the independent  assessments  on product effectiveness and  discern whether minimum standards for product purity, identity and strength our actually met.  At least  the FDA has raised the bar and companies must follow. As a consumer of  dietary supplements all I can say is it’s about time.