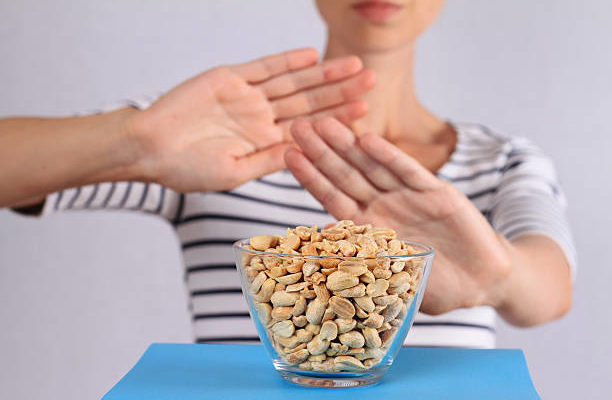 The food allergy phenomenon has grown to huge proportions in the last decade. Peanut allergies have become increasingly on the rise and drug companies are looking for a novel way of treating people whose only salvation currently may be an Epi-Pen for people for sever, life-threatening reactions. An herbal formula written by a very famous Traditional Chinese Medicine (TCM) doctor, Dr. Zhang Zhong Jing, nearly 2000 years ago may have the answers we’ve all been waiting for.

This herbal approach is not the same as recent suggestions about building up tolerance to peanuts buy eating a small amount daily over time. The ongoing herbal study for food intolerance and food allergies has passed initial FDA testing in-vivo and in-vitro and is now successfully being studied on human patients with allergies to tree nuts, peanuts, fish, shell fish and sesame allergies. The human studies have been approved by the Mount Sinai School of Medicine Institutional Review Board.

Intermittent attacks of abdominal pain, a stifling sensation, irritability, and warmth in the chest (anxiety), diarrhea after eating, and cold hands and feet are all symptoms TCM recognizes as part of the expression of food allergies after someone eats trigger foods. The food allergy herbal formula known as FAHF-2 contains nine well studied Chinese herbs. Peanut allergic mice given FAHF-2 were found to establish a peanut tolerance. This effect was associated with up-regulation of interferon-gamma by CD8+T cells.

Herb quality is absolutely critical to effectiveness and the herbs should be verified through HPLC fingerprinting according to the FDA’s Guidance for Industry Botanical Drug Products. The pharmacological actions of individual herbs comprising FAHF-2 on peanut induced anaphylactic reactions determined all nine herbs were necessary to prevent anaphylactic reactions. Results showed that some individual herbs reduced peanut induced anaphylactic symptoms but no single herb offered full protection from anaphylactic symptoms equivalent to FAHF-2.

‘The herbs had highly variable effects on histamine release, as well as peanut specific serum IgE and IgG2a levels. The herbs also had variable effects on IL-4, IL-5 and IFN-γ levels. A simplified formula comprised of only the most efficacious individual herbs showed only partial efficacy and was not able to reproduce the effects of FAHF-2. This finding suggested that component herbs of FAHF-2 may be working synergistically to produce the curative therapeutic effects produced by the whole herb formula.”1

For more information regarding the nine herbs used in the study please see the link below. To purchase the nine herb formula please contact Cathy@PacHerbs.com. Individual consultations are available upon request.

Would it not be incredible if there was a way to prevent peanut allergies in children or to reduce asthma in children?  I think everyone would agree this would be a worthwhile medical development, certainly news worthy.   Researchers have been studying Chinese herbs for years and are now able to prove that two specific herbs used in Traditional Chinese Medicine (TCM) can reduce the inflammation response that occurs with allergies. This is  especially important since food allergies and peanut allergies have been on the rise in children.

If I child goes into a anaphylaxtic shock as a result of a peanut allergy it is always a serious event.  A study recently done on two Chinese herbs; Rubia cordifolia (Qiancao) and Dianthus superbus (Qumai) has the potential to save lives.  Researchers at Mount Sinai Medical Center have studied how these herbal extracts can suppress IgE production and prevent peanut-induced anaphylaxis.

"Rubia cordifolia and Dianthus superbus inhibited the in vitro IgE production by a human B-cell line in a dose-dependent manner and the in vivo IgE production in a murine model of peanut allergy without affecting peanut-specific-IgG1 levels. After challenge, all mice in the sham groups developed anaphylactic reactions and increased plasma histamine levels. The extract-treated mice demonstrated significantly reduced peanut-triggered anaphylactic reactions and plasma histamine levels."

"The extracts of Rubia cordifolia and Dianthus superbus inhibited the IgE production in vivo and in vitro as well as reduced anaphylactic reactions in peanut-allergic mice, suggesting potentials for allergy treatments."