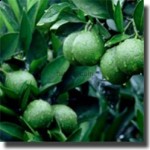 I am often asked, "What's a good herb for weight loss?"  Ever since ephedra was banned it seems people have wanted a substitute.  Lately, one Chinese herb in particular is showing up in a lot of weight loss supplements.  That herb is unripe bitter orange.  Although it is not ephedra (ma huang), is does contain a similar chemical to the ephedrin called synephrine.

Bitter orange  refers to the peel of a particular specie of unripe orange and has been used in Chinese herbal medicine for centuries.  Also known around the world as citrus aurantium  it's a native of the Far East and grows well in most warm climates.  Unripe bitter orange is part of the Chinese herb pharmacopeia and has been used in Chinese cuisine, fragrance and medicine for over 2000 years.

The medicinal part of the bitter orange seems to get all the attention these days.  It has digestive effects and carminative effects, meaning it can help prevent gas formation in the intestines.

However, if you are looking for herbs for weight loss this is not the magic bullet.  There have been some reports that taking unripe bitter orange is conjunction with caffeine, mate and other stimulants can cause cardiotoxicity, increased blood pressure and increased anxiousness. Sounds like a bad combination to me and I would stay clear of supplements combining these stimulants.

Unripe bitter orange was never used in Traditional Chinese Medicine for weight loss but it was used and still is used to help improve digestion and to move the Qi or energy, help unblock the bowels, and it has been used to raise blood pressure. But like most Chinese herbs, its use is magnified when paired with other herbs in a set formula with proven time tested benefits.    Funny how an old Chinese herb is new again.